A Guide to What You Must-do in Basel

Switzerland's Basel will astound you. While Zurich and Geneva are well-known, Switzerland's third-largest city shouldn't be disregarded. Basel has so much to offer that exploring it would take at least three days. There is much to marvel at, from the Old Town and Rhine River life to the countryside along the border between Germany and France.

If you ever find yourself in Switzerland, be sure to include a visit to the nation's cultural center in your travel plans. Enjoy the ideal fusion of old-world and new-world architecture, outdoor recreation, and world-class museums. In a nutshell, Basel has everything!

1. Walking Around The Old Town In Basel, as in many other locations in Europe, the Old Town is unquestionably the main draw for tourists. A walking tour is an ideal approach to becoming familiar with Basel's Old Town.

Our walking tour began at City Hall (Rathaus) near the Market Square (Marktplatz), where we went inside to admire the lovely courtyard before moving on to discover off-the-beaten-path locations like The Hoosesagg Museum (Pocket Museum), the world's smallest museum, and the hanging gardens of the Museum der Kulturen Basel (Museum of Cultures).

2. Or Stroll Through The Altstadt by Yourself 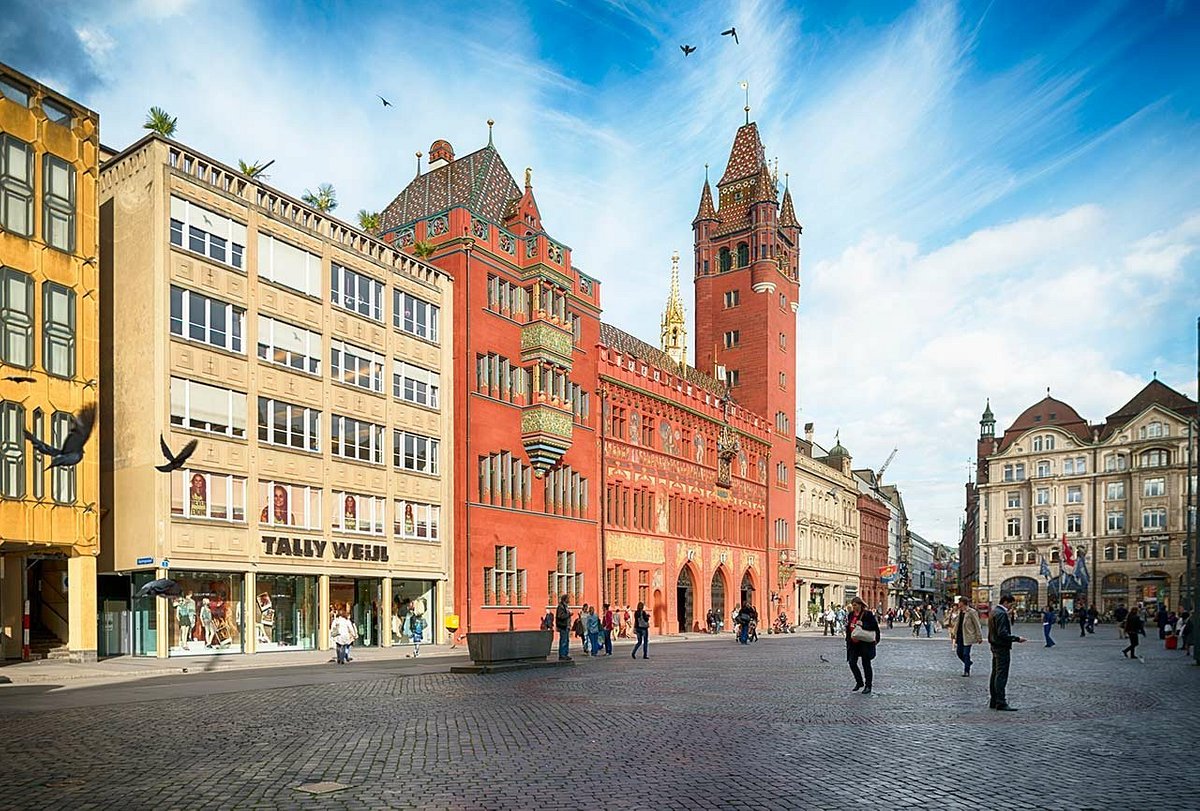 You should walk around the Old Town to see what Basel has to offer. So many great places are close to each other that it's easy to miss them when you're driving or riding a bike. With its twin towers and red sandstone walls, Basel-Munster Cathedral shows what the city is all about. When you go to the town hall, you will see a similar style of building. The town hall must be over 50 years old. Basel has a long history, which is shown by the beautiful designs, red facade, and tower.

The Marktplatz is a square next to the town hall where people sell fresh fruit and vegetables. In the old town, which is built on two hills along the Rhine, there are many shops and boutiques to visit.

3. Take a Weidling Tour Along the River Rhine 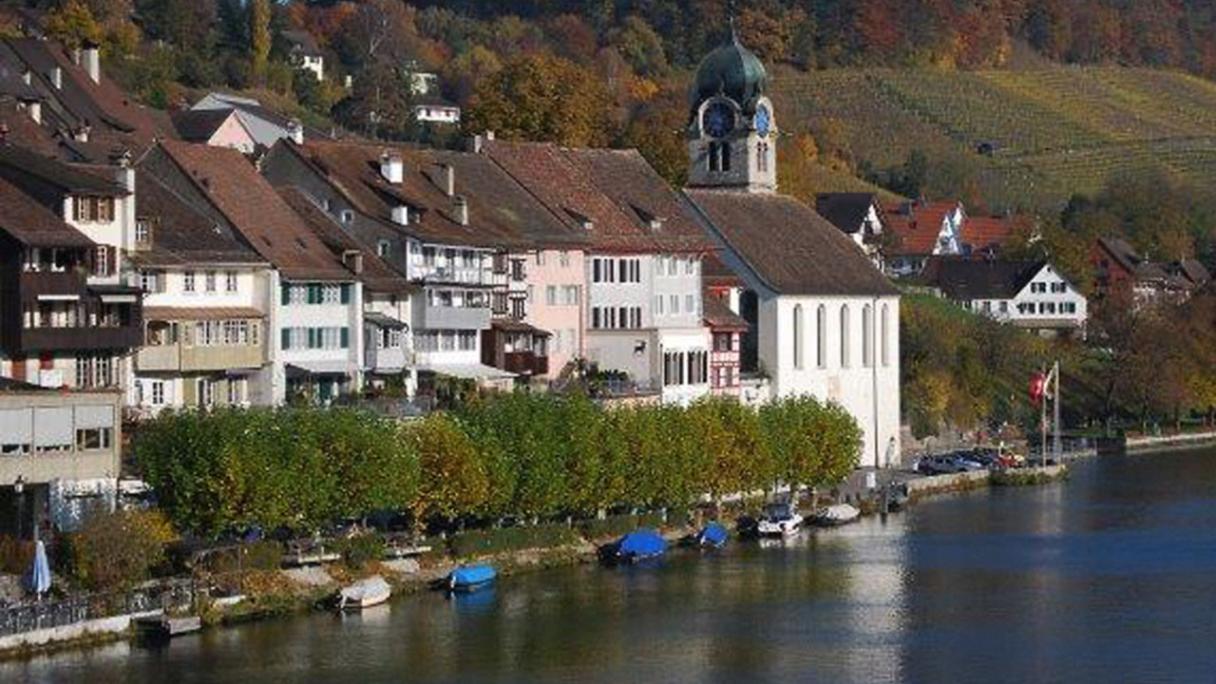 Weidlings are a type of Swiss boat. Made for leisure and fun. Along the Rhine, you can canoe or kayak around Basel. Her traditional wooden ship, Weidling, was built in Basel in the 15th century, which is another interesting thing about it. Traditional boating on the Rhine is one of the most interesting things to do in Basel.

Weidling is a wooden boat that has been used in Basel since the Middle Ages. A technique called "cycling" is used to move them upstream. You can sail on the Rhine to find out how merchants got from Venice to the North Sea. With the help of the Waidlig Basilea Association, you can book water tours of the city, learn to sail, or take a Weidling ride with an aperitif and take in the beautiful views of Basel's downtown. You'd be astonished at how many folks use the Rhine as a recreation area in the summer. Between the several ferries, you'll see a line of people swaying. You must swim in the Rhine and join the natives if you are a *good* swimmer! The Basel folks drifted downstream with the current of the river.

You'll see that everyone is packing their swimming gear in a blue backpack. Wickelfisch is their name. One is in every flat owned by a Basel inhabitant. They help you keep your things safe when riding in the rain or floating along a river since they are waterproof. Many quaint stores along the Rhine offer Wickelfisch for sale. Basel offers a variety of unusual activities, particularly along the Rhine. You could assume that crossing the Rhine would be similar to crossing any other river. on the boat or the bridge. But in Basel, a boat without a motor and oars may get across the Rhine. With the aid of a cable to which it is connected, it goes through.

Four locations provide Rhine river crossings on response ferries to Basel. The river will do the rest of the work as you go from one end of the town to the other once the captain has adjusted the rudder when you get on board. 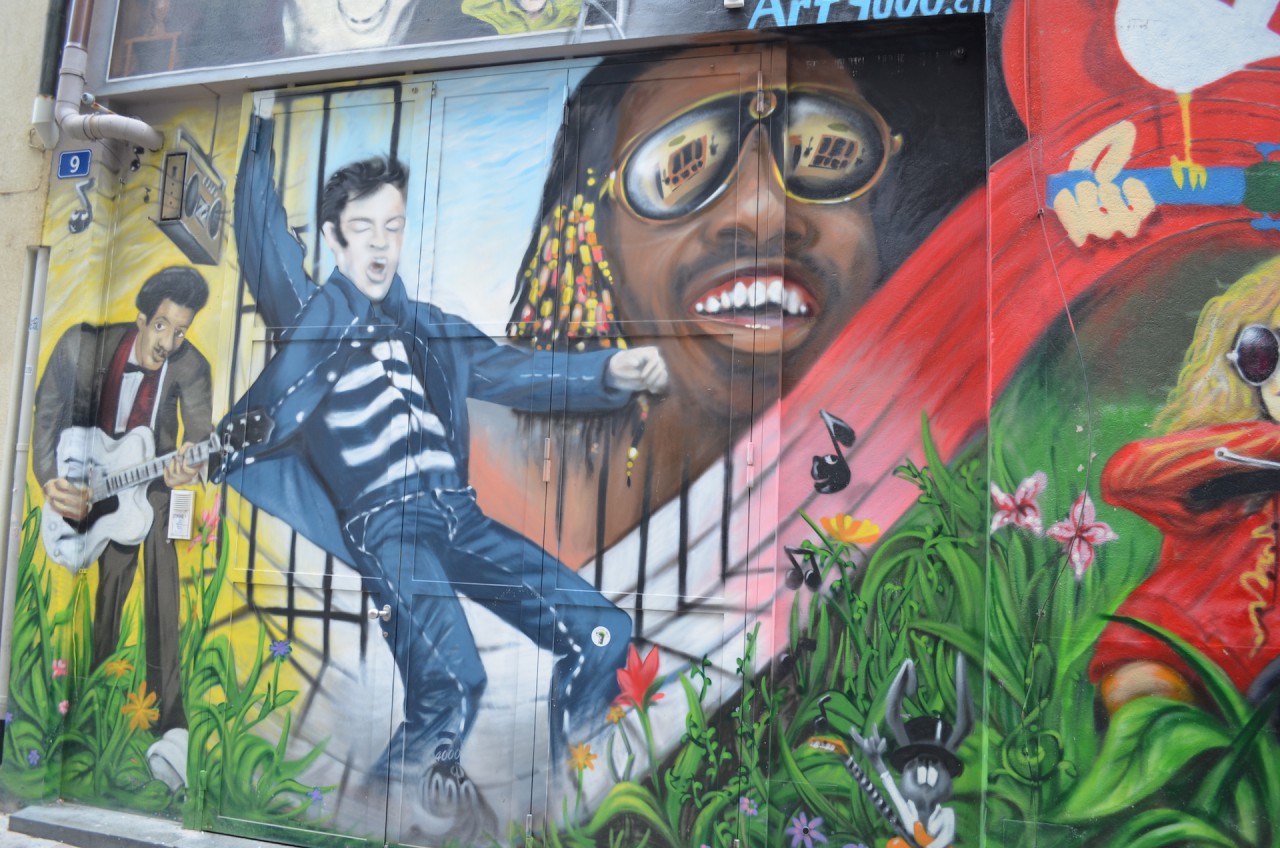 Basel is rich in historical significance. Take a city tour at Basel's Artstubli to find the city's hidden artistic gems. The city is home to a number of monuments. The sculpture known as the Lällekönig, or Monarch of the Tongue, depicts a king pushing his tongue out toward the Kleinbasel, or right bank of the Rhine from the left side of the Grossbasel River. Despite its lengthy history, Basel has made a strong commitment to modern art.

Taking an urban art tour with Artstübli Basel is a fantastic way to discover undiscovered art in Basel. You'll learn about the city's hidden art on this tour, including the numerous Space Invader tiles that are dotted around the area and the unusual locations of the Lällekönig ("the Tongue King") sculpture, which sticks out his tongue from Grossbasel (on the left side of the river bank) toward Klein Basel (Right Side of the River Bank).

7. Relax by The Tinguely Fountain One of the most well-known Basel painters is Jean Tinguely. He was a member of the French Avant Guard movement in Paris and is renowned for his kinetic art that moves. There are several fountains in Basel, but the Tinguely Fountain stands out as a must-see. On the location of the former Basel theatre, close to Kunsthalle Basel and in front of the new Basel theatre, the Tinguely Fountain was built. One of the most intriguing works of art is it.

Visit the Tinguely Kleinbasel Museum on the Rhine's right bank at Lonely Park if you want to see more of Jean Tinguely's artwork. Another wonderful area to go and take in the outdoors is Loneliness Park. With artwork dating from the early 15th century to the present, the Kunstmuseum Basel boasts one of Europe's biggest and oldest collections of public museums. A significant location in Basel's center has been redefined by the new Kunstmuseum Basel building. It represents both fresh beginnings and continuity as a location to display and preserve art and events. The Kunstmuseum was Basel's first museum.

Paintings from the 14th to the 20th centuries are included in the permanent collections of the Museum of Fine Arts. You will like this museum If you enjoy the works of van Gogh, Gauguin, and Cézanne as well as Picasso and Léger from the 20th century.

9. Step Foot in Three Countries at The Dreiländereck 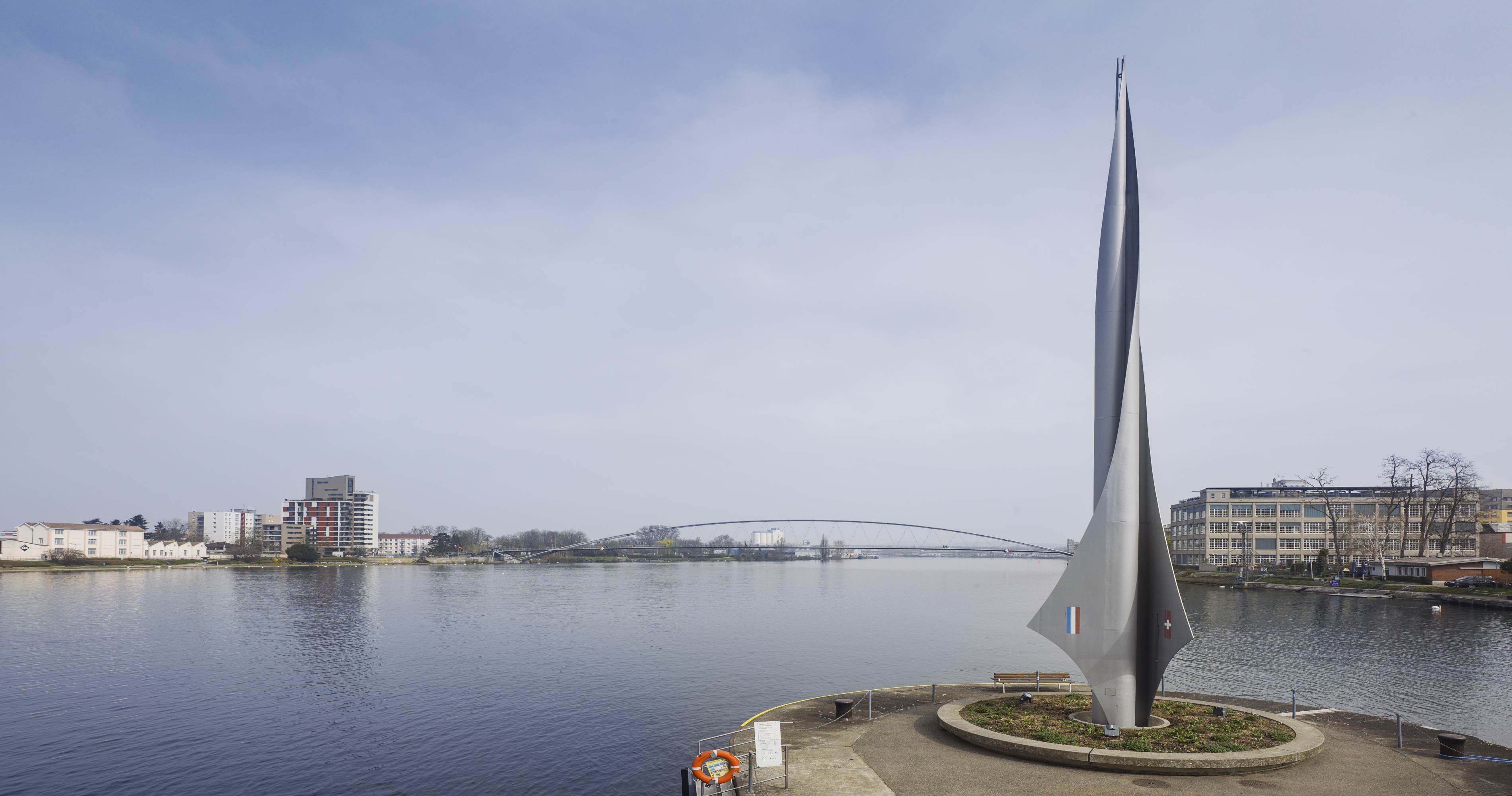 You'd think traveling to three nations in one day would be quite challenging. With artwork dating from the early 15th century to the present, the Kunstmuseum Basel boasts one of Europe's biggest and oldest collections of public museums. The newly constructed Kunstmuseum Basel redefines its important position in the city. It represents both fresh beginnings and continuity as a location to display and preserve art and events. This is the spot for you if you like collector's attractions.

In a unified Europe, the CH/D/F border triangle would be in the center of the Rhine, although it would really be in Switzerland, close to the German border, on the Rhine's banks. Hikers may cross the river using footbridges to reach France on the opposite side. Many locals in Basel experience it every day. Many residents of Basel who work there really reside in France or Germany. You need to visit Dreiländereck if you're in Basel. A monument pointing to the intersection of the German, French, and Swiss borders along the Rhine may be found there. 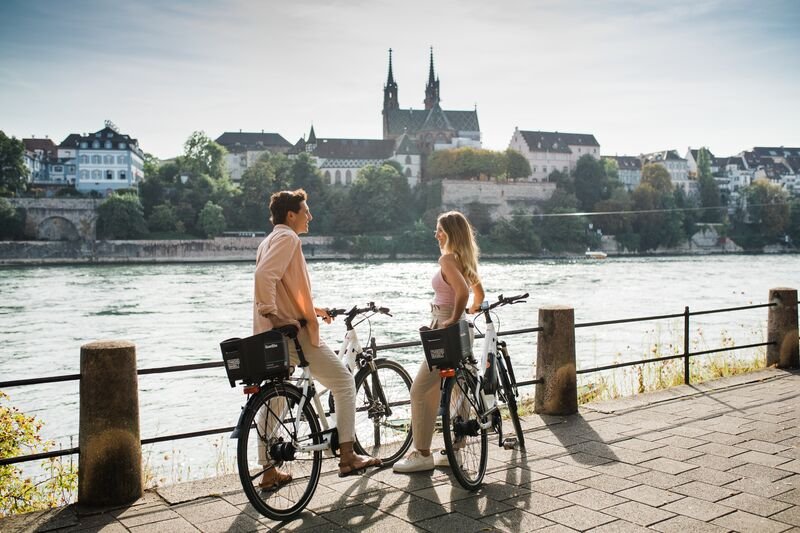 Speaking about crossing Germany or France, walking the RehbergerWeg is one of the greatest methods to achieve so. The Vitra Design Museum in Germany is connected to the Fondation Beyeler at the Vitra Campus via Rehberger Weg. Visits to these two museums are recommended. E-bike rentals are available at Central Station's Rent a Bike. Visit Basel to explore the gorgeous Rehbergerweg while also seeing Switzerland's third-largest city after Zurich and Geneva.

German artist Tobias Rehberger's sculptures along the road. You may use this chance to walk over the German border. One of Basel's most cherished activities is this. It is situated in the triangle formed by the borders of France, Germany, and Switzerland. Three entirely different countries come together peacefully. The Foundation Beyeler Museum of Contemporary Art is one of the most popular museums in Basel. The private collection of Hildy and Ernst Beyeler is housed in the Foundation Beyeler, which is situated on a lovely estate. Along with indigenous artwork from Africa, Oceania, and Alaska, there are 200 pieces of art by Monet, Cézanne, van Gogh, and Picasso. Numerous museum exhibits are on display in partner museums all around the globe and are also accessible for visits. A distinctive collection of interior design, lighting, and furniture forms the basis of the Vitra Design Museum's work. One of the coolest activities in Basel was cycling at the Vitra Design Museum. There are 24 markers with artwork along the walk going to the museum, which takes us to the quirky museum grounds with Frank Gehry's building ideas. One fascinating fact is that one of the top museums in the world for industrial interior architecture and design is the Vitra Design Museum.

Basel is a must-visit destination for everyone visiting Switzerland. With great experiences waiting for people at every corner, this city is too magnificent to be explored. The city also offers great experiences for shopping, or for those looking to just explore the historical city vibe. In brief, Basel holds a surprise for everyone, and every age group and must be visited at least once to explore adventures and locations.