Best Things To Do When In Venice

The city that’s built on more than 100 tiny islands has a landscape that you dream of or find magnificent in a painting has the ability to enthrall anyone who visits it even once. Venice is the capital of northern Italy’s Veneto region and has stayed true to its name “The Floating City” with winding canals located all over the place.

One can never have enough of the stunning architecture and picturesque bridges that have made every traveler fall in love with the beautiful “City of Canals”. It might be a popular city for the tourists but there are a lot more gems hidden at the corners of the place that you can’t miss on your trip to Venice. Here’s everything that you must do and every place you must drop round to see when you land in Venice! 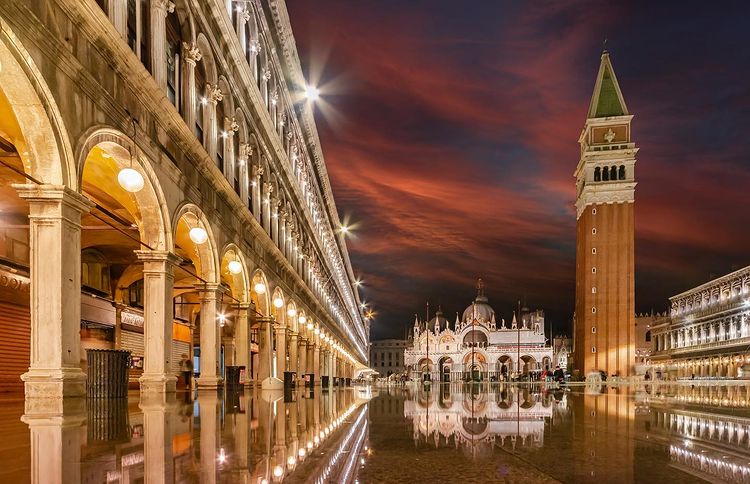 Piazza San Marco or St. Mark’s Square lies in the heart of Venice and is a place that no one wants to skip from their itinerary. Napolean once called it the “drawing room of Europe” and once you are in that square, you’ll know what he meant.

From this site, you can travel to various famous spots quite conveniently and so, add this piazza at the top of your “places to visit in Venice” list when you are planning your trip. Some elaborate buildings surround this square and you can take a 360-degree turn to breathe in the history associated with every corner of the piazza. Pour yourself a bellini and take a stroll here! 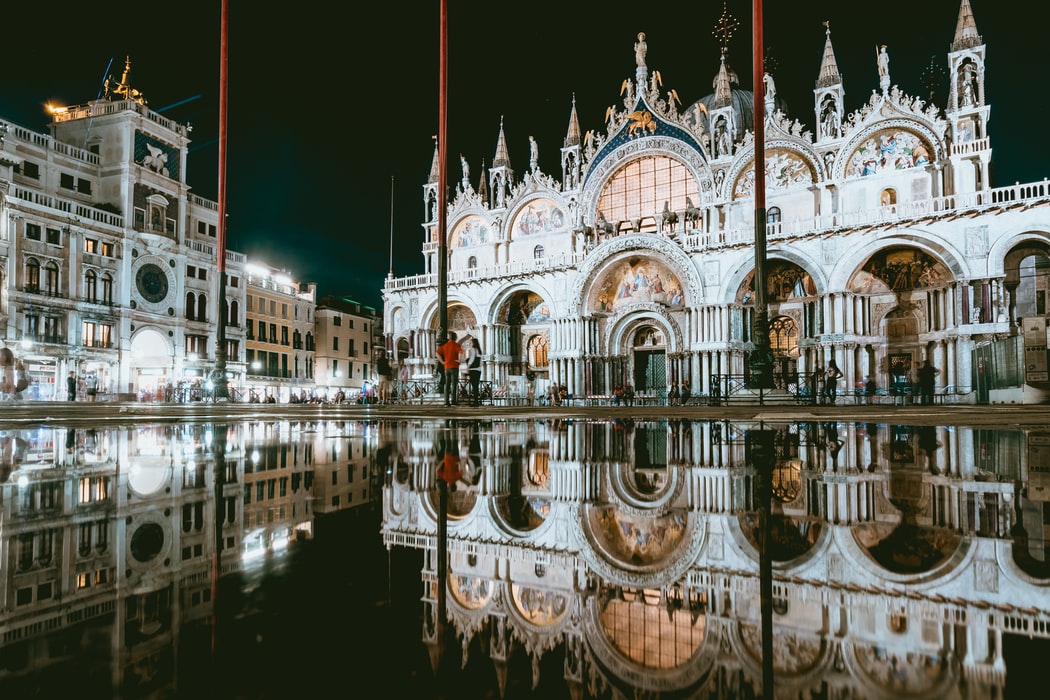 If there’s one religious building that enchants the visitors with its serene architecture and exquisite artwork, it’s St. Mark’s Basilica. It has been standing since 1092 and continues to reflect the same charm that it used to centuries ago. Heading over to Northern Italy? This cathedral church should be your must-visit spot.

If you are someone who can appreciate the intricate details of an architecture and sculptures that have adorned the place for such a long time, this will grab your attention and you won’t be able to take your eyes off the domed ceiling until you have witnessed the breathtaking details and Byzantine artworks and captured everything in your mind. 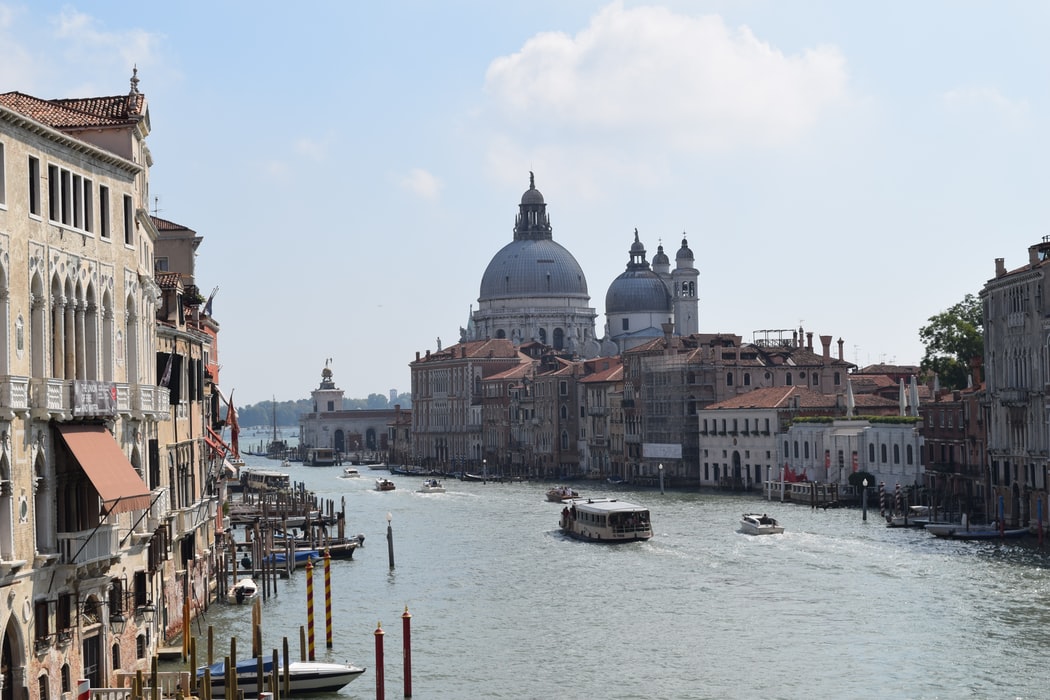 When you are in the “City of Canals”, you have to head over to the largest one, Canale Grande, and experience the vastness of the city that’s built on water in a go. This canal resembles a river and has stunning Venetian palaces outlining it to enhance the thoroughfare.

This canal has been used as a waterway to transport people and goods from one end to another for centuries and walking along the sections of the canal would be one of the most soothing escapades with stories to share for a long time. This is a crucial part of the city and if you ever find yourself in Venice, your footsteps have to trace the path along the canal. 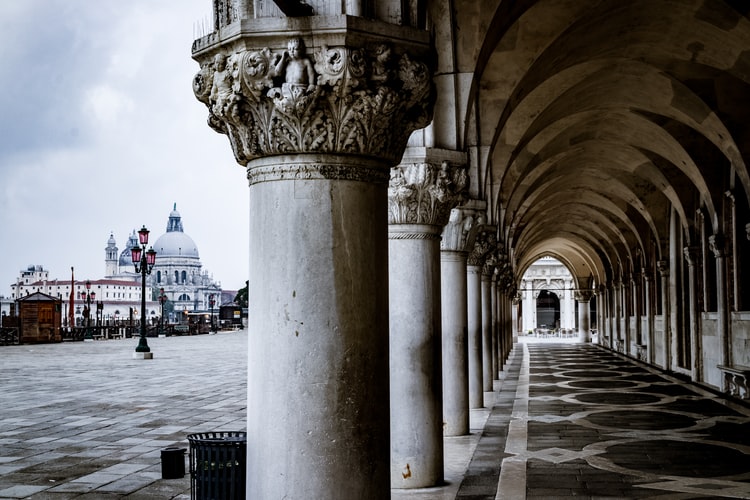 When you have absorbed the views of the Canale Grande and St. Mark’s Square, it’s time to travel to the Doge’s Palace that has the spectacular view of that largest Canal in the city. The arched shaped design of the palace embellished with white stone and diamond motifs that faces the street has a refreshing touch to it. The exterior of the building will impress you and will pique your curiosity. Your steps will automatically take you inside the grandeur palace.

The interiors are filled with attractive details from the past including furniture and artwork that preserve the historic significance. The ones who have visited the palace and the experts in this field highly recommend the tourists to visit the spot and dive deep into every curve, nook, and corner of the architecture. 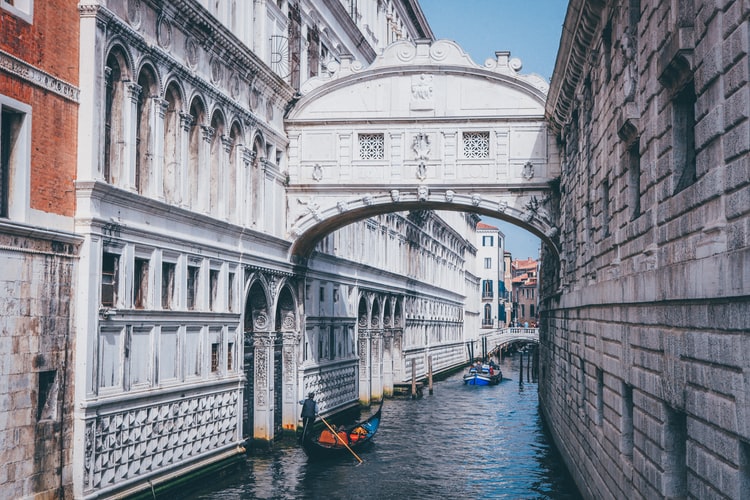 With numerous bridges enveloping the city, one structure that is quite popular and has an intriguing tale linked to its existence is the Bridge of Sighs. The historic significance of this bridge is known to every person who has been there or lives in the city. It must be on every globetrotter’s list!

This bridge passes over the Rio di Palazzo connecting the Prigioni Nuove to Doge’s Palace. The word on the street is that when the criminals traveled over the bridge while being transported from the Palace, they looked around the city and sighed imagining the next phase of their life in prison serving their sentence. When you arrive at the St. Marks’s Square and you are done people-watching, make your way towards the Bridge of Sighs. 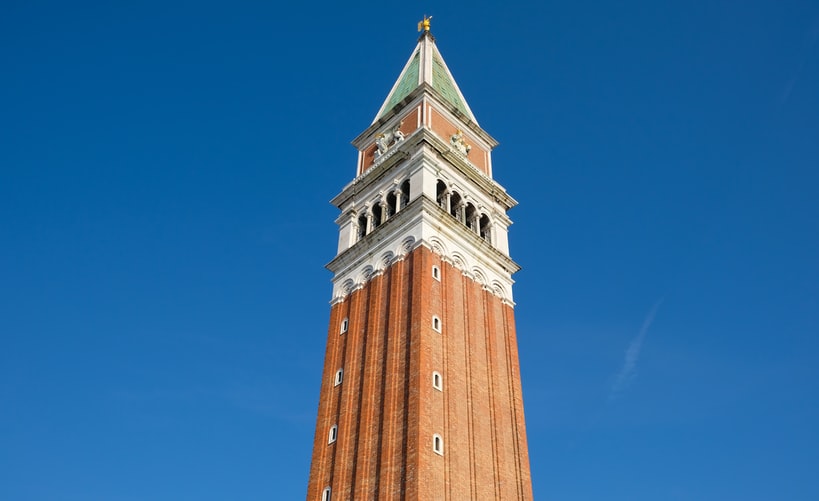 The San Marco Campanile towers over the city of Venice with a height of 98.6 meters. Yes, it is the tallest building in this city in case you are wondering. Another interesting fact about this structure is that it was reconstructed after the original one that was built in the 9th century caved in during the beginning of the 1900s. The campanile served as a watchtower during that time.

This tower endured quite a few disasters including, earthquakes, fire, and lightning. The red-brick design has a simplistic sense to it that is surprisingly brilliant. But the surprises don’t end there! The bell housing and the lofty peak of the structure comprised of a multitude of stone-based designs and arches. Moreover, the topmost part has a statue of the Angel Gabriel sparkling with a golden finish. Don’t forget to call the elevator that will take you on the top for astounding views of “The Floating City”. 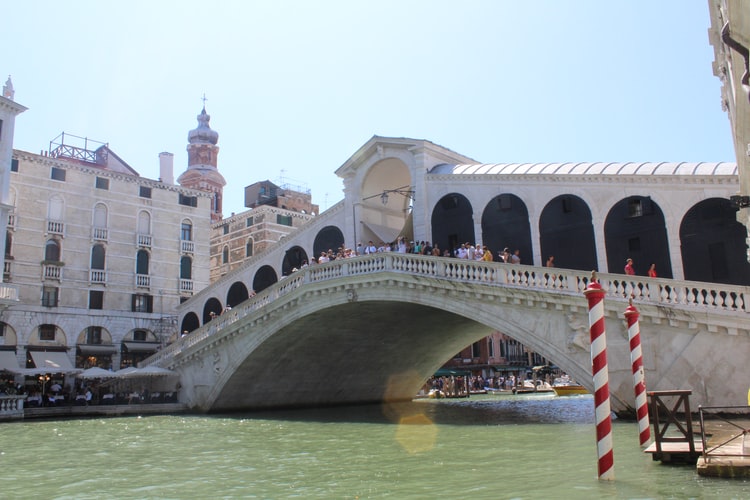 Let’s take you towards an iconic phase of Venice with a bridge that spans the Canale Grande – Ponte di Rialto. This one is brimming with tourists and travelers as it serves as a connection between the San Marco and San Polo districts of Venice. Strolling on this bridge will fill you with calmness and an urge to know more about the city – all at once!

It was originally made of wood and stood for hundreds of years before the collapse happened in 1524. The incident led to the construction of a stone bridge that exists now. If something frames the Canale Grande impeccably, it’s this bridge. Apart from these features, there’s another that will convince you to visit this tourist spot – the shops surrounding the area that are a hub for souvenirs. 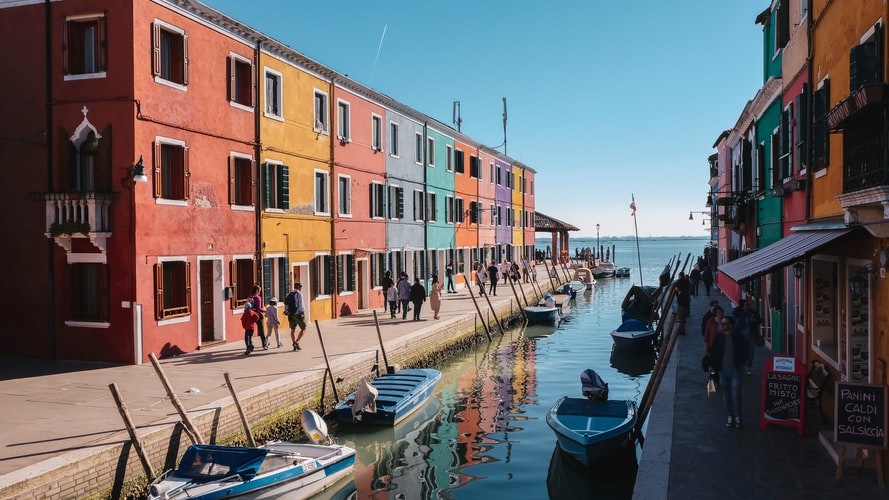 Away from the hustle and bustle of the city lies an island within the district of Venice called Murano. It is basically a cumulation of many tiny islands that are linked together by a chain of canals and bridges. It is almost formed like Venice. This place is tranquil as compared to the other neighboring regions.

This one island has an abundance of locations worth watching including Palazzo Da Mula, Basilica di Santa Maria, and the Campo Santo Stefano. Glass blowing is an integral part of the island and anyone who enters that area can witness live presentation at the factories that have emerged there. 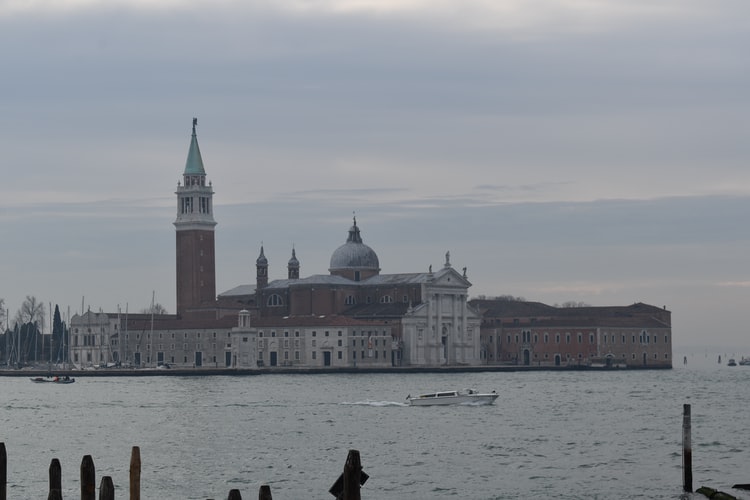 One of the small islands that are located separately and not in the direct vicinity of the city and its canals is San Giorgio Maggiore. Travel a short distance from Venice Basin and the Grande Canal on a private water taxi or Vaporetto and you will reach this hidden but wondrous destination. The island has special spots that stupefy the visitors including San Giorgio Monastery, the Church of San Giorgio Maggiore, and the large campanile that seems like a reflection of the tall structure in St. Mark’s Square.

A little harbor craves your steps and as you grace that path, you will see the boats being moored. The beautiful church and monastery are not too far away once you step in there. To catch a glimpse of the splendid views of the whole city of Venice, reach the top of the campanile.

10. Wander In Placid Streets Of Venice 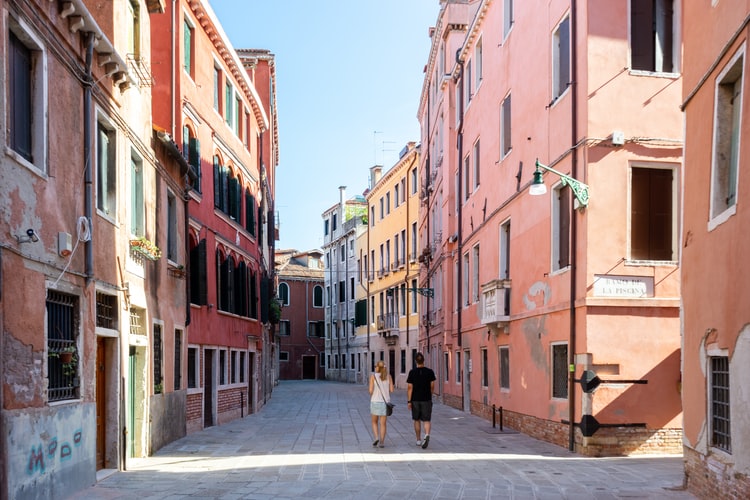 When you have admired quite a few of the enlivening piazzas, striking bridges, and canals of the city, it’s time to flutter your wings and escape into the bewitching city! Wander amid the crowd in the small streets of the city that make you feel less like a tourist and more like a city dweller. Savor a gelato as you make your way along the peaceful canals away from the ones swamped with tourists.

You’ll discover so much about this city when you are sitting at a tiny café sipping your cappuccino. When the sky dusks and the surroundings twinkle with dim lights, you can watch waters that staying calm as a millpond and immerse yourself in that serenity.

The post Best Things To Do When In Venice appeared first on Luxury Hotels Guide.